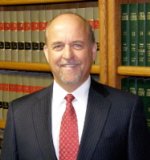 Zackery E. Reynolds (Zack) has had a distinguished legal career. He has had the highest AV Martindale Hubbell rating for thirty years, and served as President of the Kansas Bar Association. He now has forty years of experience.

Zack has tried over fifty jury trials in twelve different Kansas counties and Federal Court. His experience in rural areas of Kansas is bolstered by his rural Kansas roots and his knowledge and experience in cattle, farming, oil and gas, water law and his insight into the things that influence and persuade rural Kansans and Missourians. His knowledge of local venues is quite extensive and is put to valuable use for his clients. His personal injury practice has developed over the years from an insurance defense practice to almost exclusively representing injured clients. Also, there is a significant emphasis on business, trust and estate related litigation.

Zack’s practice is somewhat unique as many lawyers do not combine these practices with a litigation practice. However, these areas have always been a major part of his practice. Many business clients first came to Zack as litigation clients.

Personal: Zack enjoys hunting, fishing, hiking and running. He has climbed twenty-three “14ers” in Colorado and has completed seventeen marathons and forty half marathons. Zack has also contributed to his community in several ways, as President of the Fort Scott Area Chamber of Commerce and Fort Scott Kiwanis Club, and was elected to two terms on the Board of Trustees of Fort Scott Community College. His wife, Leslie, is a retired teacher and his son Adam is a Minister in Hume, Missouri.